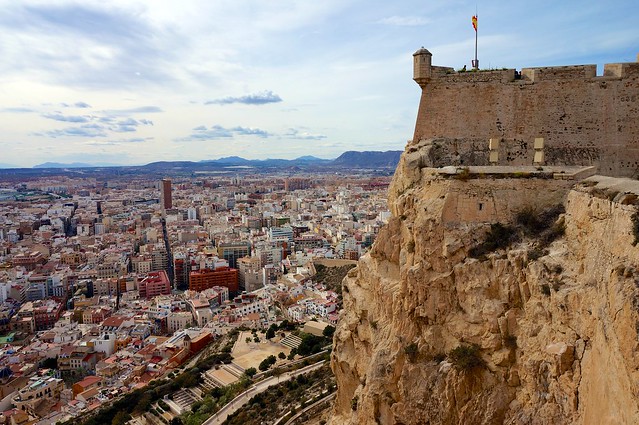 Alicante is a beautiful beach city on the Mediterranean coast of Spain, part of the Catalan-speaking Comunitat Valenciana. While it’s most popular during the summer, in the tourists don’t swarm quite as much and the climate is mild and sunny.

The city’s most notable feature is the massive Castillo de Santa Barbara, which sits 500 feet above the ground on top of Mont Benacantil; it was built in the 9th century by the invading Moors, and you can enter it for free (if you don’t feel like walking, there’s an elevator bored into the heart of the mountain).

The island of Tabarca, a 45 minute ferry ride away, feels like stepping into a time capsule, with no cars occupying its tiny streets; it’s a worthy day-tripping destination. Benidorm and other expat-heavy beach towns are all reachable by the local tram system.

Nightlife in Alicante, like any Spanish city, starts and ends late, and the cuisine is exceptional if you want to splash the cash: 8 restaurants around the port are listed in the prestigious Michelin guide .

If for some reason you get restless here, it’s only 90 minutes by high-speed train from Valencia or 2 hours and 20 minutes from Madrid .

You can find lots of cheap flights from Los Angeles to Alicante during the winter months, with daily departures from LA making a quick stopover in Norwegian’s hub cities of Stockholm or Oslo before flying south. Here’s a sample fare for the second half of January:

Jan 17-31 from Los Angeles to Alicante on Norwegian for $427. Support this website by booking your flight on DoHop.